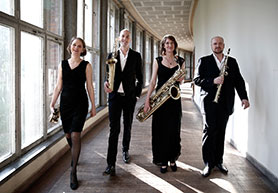 It is obvious why the four musicians from Berlin are called "clair-obscur".
Clair-obscur, a painting technique from the Renaissance, in which opposing light
and dark tones are used to symbolise heavenly and earthly elements, is the visual equivalent of the sounds the quartet draw from their instruments: on the one hand, warm, intense and clear, and on the other harsh, aggressive and robust. These two poles can also be found in the composition of the quartet: two female and 2 male musicians in one ensemble create a unique musical energy.

The main focus of the group is chamber music. With the support of their mentor and teacher, viola player of the Artemis String Quartet, Prof. Friedemann Weigle, clair-obsur has developed into a highly sought after ensemble, playing venues such as the Philharmonie, Berlin and the Carnegie Hall, New York, first playing here in 2006. The ensemble concentrates not only on original works written for saxophone quartet but also greatly expands and enriches its repertoire with unexpected transcriptions and stunning arrangements.
Clair-obscur is however, not only well known for chamber music but also for their individual, original and self produced Music Theater works. They are often found on stage performing Camille Saint-Saens "Carneval of the Animals together with the actor Boris Aljinovic. Even more theatrically demanding is their version of the ballet "The Wedding on the Eiffel Tower (Les mariés de la Tour Eiffel)" by Jean Cocteau, in which the concert becomes a caberet and the musicians, actors. Here they not only impress with musical virtuosity but also with mimic, wit and body language.
As well as this, the four quartet members can regularly be heard in orchestras such as the Berlin Philharmonic.Clair-obsur have been rewarded for their artistic excellence with prizes in competitions such as the International ADMC Competition Illzach (2007), the Gaudeamus Music Competition (2007) as well as the Prize of the Friends of Jeunesses Musicales 2008. 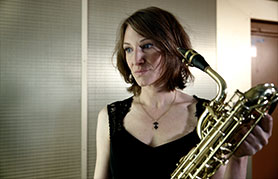 "Such a slim woman with such a big instrument!" is often heard after
clair-obscur's concerts but Kathi's mastery of the instrument shows that size
doesnt matter.
Although she otherwise loves high mountain peaks, she feels at
home in the lower register of the quartet. Whether funky bass lines or virtuosic
solos are called for, Kathi can deliver. The same diversity is found in her activities
as a musician. She performs in glittering concert halls, renowned theatres and
(previously) smokey Berlin nightclubs. 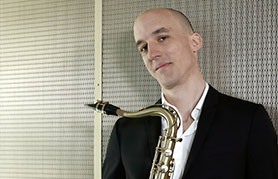 If there was no Christoph Enzel, the quartet would not only be short of an
outstanding (1.96m) tenor player, who?s Swan from Saint-Saens reduces the
audience to tears, but also their repertoire would shrink to half its size.
There is
almost nothing that he can?t arrange. Even from large orchestral works he
conjures perfect quartet versions and is always on the look out for new jewels to
add to the repertoire. The swabian jogger is also a prize winner of the
international Gustav-Bumcke Saxophone Competition 2004. 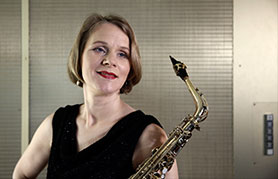 Where would the quartet be without her calming influence? She prefers cantabile
melodies to frantically virtuosic solos although she is a master of both. In all
matters she maintains perspective and command of the situation, she is the rock
in a storm.
Qualities essential for someone who has both a family and a hectic
career. Because of these qualities and her wonderful golden sound, Maike is one
of the most sought after saxophonists by the orchestras of Berlin. On top of all
this she is also a very experienced chamber musician having played in diverse
ensembles before devoting herself to clair-obscur.


ps. It is her first, one and only, loved Selmer Alto Saxophone Super Action 80 Series II

Jan is a born "first violinist". No one can talk as fast and as much as him.
This same virtuosity, enthusiasm and exuberance he applies to saxophone playing. In
between playing the saxophone, Jan likes to go fishing in the rivers and canals of
Berlin. These moments of calm he really needs since he won the world famous
Deutscher Musikrat Competition and became a highly sought after soloist.